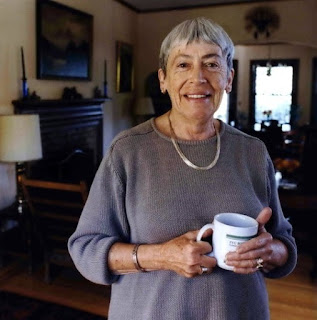 I am not sure that I want to live in a world without Ursula K. LeGuin, the sci-fi and fantasy writer who died Monday in Portland, Ore., at 88.

I was privileged never to have met her. "Privileged" perhaps because, as former poet laureate Billy Collins once suggested,  "Meeting your favorite author is one of life's most reliable disappointments." But I gorged on and wallowed in her works, most notably The Earthsea Trilogy. I was not disappointed.

Someone once said there are two sorts of science fiction -- the one full of whiz-bang gadgetry and the other addressing the question, "What would it be like if a Martian landed in your backyard?" LeGuin was of the latter sort and had the thoughtfulness and critical thinking capable of weaving credible tableaux that drew this reader in. "Fantasy is the hardest sort of writing," my mother once said. "You have to be able to get the reader to step across the line between incredulity and credulity." LeGuin could do that. What other writer had the balls and capacity to construct a world in which men morphed into women and women morphed into men every six months or so? She was not a coward.

I suppose I might weep at LeGuin's death, but that provokes the question of why I do not rather take joy that such a writer actually did exist? Yes, she won awards, but so what? Ursula K. LeGuin tripped me and I am very grateful for it.
Posted by genkaku at 8:10 AM