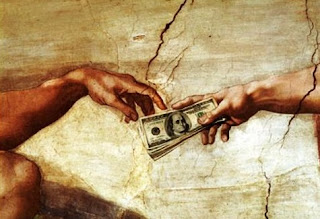 I guess it's not especially weird that the financially-angled news agency Reuters should announce the death of Mormon President Thomas Monson with a lead that reads:


(Reuters) - Mormon President Thomas Monson, who headed one of the world’s fastest growing and most affluent religions, has died at his home in Salt Lake City, Utah, the church said on Wednesday.

If the Roman Catholic pope died, would the lead make note of the fact that the Vatican -- home to a lot of simpering about poverty and simplicity -- is the richest religion in the world?

It made me wonder, Trump-fashion, which religions have the most dough. The broad-brush quasi-answer in a 2013 article, puts the top ten at: Roman Catholics, Islam, Judaism, Mormons, Church of England, Episcopalians, Televangelism, Protestantism, Freemasonry, Church of Scientology. Obviously there is overlap and room for confusion ... but it starts the ball rolling, I guess. Here's a Wikipedia take.

Is there a world religion that does not, in one way or another, ask for your money/sweat? And is there any shortage of people who credit some being or state of mind that would encourage them (to hear the pundits tell it) to give and keep on giving? True believers may scoff at worldly wealth and praise a lord of their choosing, but there's a lot of income in them thar woods.

Yes, I know, someone's gotta keep the lights on and besides, you'd just spend it on some worthless and ignoble endeavor ... but still ... just a small footnote.
Posted by genkaku at 6:25 AM