if you've got it, don't flaunt it

A retired Japanese crime boss has been arrested in Thailand, ending more than 14 years on the run, after photos of his yakuza tattoos and a missing little finger went viral.
Shigeharu Shirai, 72, was apprehended while he was shopping on Wednesday in the central market town of Lopburi. 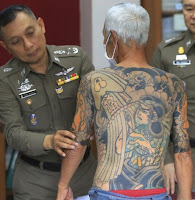 Japanese authorities had sought his arrest over an alleged role in the shooting of a rival in 2003, after which he fled to Thailand, married a local woman and drifted into a seemingly peaceful retirement.
That was until a resident posted photos of the diminutive retiree playing a streetside checkers game with his intricate gang tattoos on full show and a missing little finger – yakuza members often slice off a fingertip to atone for an offence. [Agence France-Presse]

Modesty. Omerta ... what ever happened to the good ol' days? When even the crooks are as dumb as Donald Trump, what is the world coming to?