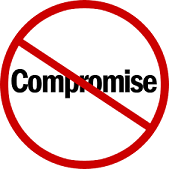 With all the smoothness of new caramel, there are 'grown-ups' who can intone without blinking: "All of life is nothing but compromise."

Every mote, every corner -- compromise. Lord, it is smooth.

And then, and then, from time to time, with all the fiery rancor of Krakatoa, the explosion occurs and the demand erupts for that which is not-not-not compromise.

Isn't there something, somewhere, somehow that is untinted and untainted?!

The question may be fodder for yet another bit of TED-talk twaddle. And yet sometimes it is a true question and demand -- a desperation and pleading and fury. An un-edged love. A rest beyond resting.

And so the quest begins, perhaps. No fucking around. No more Mr. Nice Guy. Really, really, really! Time after time, instance after instance, failure after failure, compromise after compromise. Thorough. Complete. Perfect.

The caramel contingent may point out that there is no evidence that such a suchness is even possible. And yet this Krakatoa insists. Its claws are bloody with certainty. And what evidence might there be to support the hypothesis? Well, is there anyone who doesn't know what it is to sneeze?

Is there good news to be slathered on this caramel, some promise of success? Go fuck yourself! The flames and burning lava are enough ... or, of course, you could compromise and become a grown-up.
Posted by genkaku at 9:37 AM