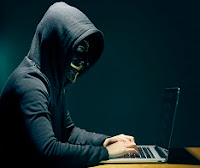 Hacking into and disrupting various internet data bases may give hackers a wonderful buzz, but it makes the rest of us nervous. It's a "privacy" issue, we whine as we proceed to reveal even more about ourselves on Facebook, Instagram, Twitter and the like.

But here is a modest proposal to those fleet-fingered hackers:

Pick a day in the future -- sometime in the summer, perhaps -- hack into Twitter and Facebook et al. and shut down every or any reference to U.S. President Donald Trump. For just ONE DAY, block all transmissions as one might block transmissions from Islamic State or other so-called terrorist organizations.

All praise, all criticism, all parsing, all offense and defense, all news and fake news, all senders and receivers, assertions and counter-assertions ... anything that references Trump ... just...

Patriotism is not just for the patriotic.

Yes, I can hear the First-Amendment yowls, but that doesn't mean I can't dream.
Posted by genkaku at 10:16 AM