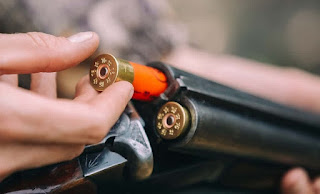 Even as students nationwide walked out of school March 14 to show their concern about the 17 students shot to death a month earlier in Florida, a California teacher accidentally loosed a round in his classroom last Tuesday as he was giving instruction about gun safety. Three students were slightly injured.

Perhaps the teacher's instruction came as a reaction to U.S. President Donald Trump's suggestion that teachers in schools should be armed: "If you had a teacher who was adept with the firearm, they could end the attack very quickly," Trump was quoted as saying.

Meanwhile, in Michigan, a Libertarian/Republican wannabe candidate for the U.S. Senate has suggested that homeless people should be armed with shotguns as a possible means of deterring the violence to which homeless people are often subjected. Pistols would be preferable, said Brian Elison, but a pistol permit requires a fixed domicile -- which homeless people by definition lack -- whereas long guns do not.

While it is not universally true, homeless people are frequently victims of a variety of mental disorders. Should this disqualify them from owning weapons with which to defend themselves? Since the drugs that may have facilitated their slide into homelessness are sometimes a factor, should that be a deal-breaker when it comes to firearms?

Yesterday, I asked my younger son who came back recently from a year's National Guard service in Sinai, whether there were some place we could both fire his newly-acquired Glock. He has been through all the courses it takes in Massachusetts in order to own a pistol and wear it concealed if he wishes. He had wanted a Glock and bought one. I'm not a fan on the one hand and yet another part of me thinks it might be sensible to own weapon given the apparently unarmed Americans (mostly minority) shot to death under dubious circumstances. My son has not yet had the opportunity to shoot his pistol -- that was the basis of my query. His face closed down as he explained the reasons he might and I might not shoot his pistol. He was thoroughly serious about it. The fact that I was his father was secondary.

No doubt the National Rifle Association is pleased that the "right to bear arms" (the reference to a well-order militia was effectively erased by the U.S. Supreme Court) is alive and well and that the NRA money spent on Congressmen and Congresswomen is money well spent. But am I wrong or is all of this a clusterfuck of irrationality coupled with a diminution of the country once called America?

With Virgil, do we all intone, "Arma virumque cano...": "I sing of arms and the man..." without blushing for shame, for sorrow?
Posted by genkaku at 9:43 AM