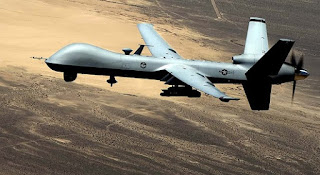 To read the print, the link-up of Google and the Department of Defense (once more aptly called the War Department) in Project Maven is nothing short of benevolent and shrewd.


Google’s TensorFlow AI systems are being used by the US Department of Defense’s (DoD) Project Maven, which was established in July last year to use machine learning and artificial intelligence to analyse the vast amount of footage shot by US drones. The initial intention is to have AI analyse the video, detect objects of interest and flag them for a human analyst to review.

"Eventually we hope that one analyst will be able to do twice as much work, potentially three times as much, as they’re doing now. That’s our goal,” Drew Cukor, chief of the DoD’s Algorithmic Warfare Cross-Function Team said in July. "The technology flags images for human review, and is for non-offensive uses only,” said a Google spokesperson.

The fine print, however, is not hard to imagine. Once caught up on all the benevolent and passive identification purposes that are "non-offensive," even a mop-jockey in the janitor's closet can be forgiven for asking, "If it's all that good for non-offensive purposes, I wonder how good it might be in an offensive realm."

Google + Department of Defense = We're fucked again?
Posted by genkaku at 11:48 AM