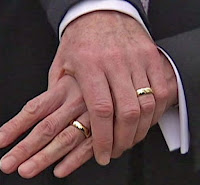 Beyond any ACLU-ish outrage that might arise, there is something grossly unkind about the Texas newspaper editor's decision to excise a son's 31-year relationship to his husband from the obituary of the son's mother. The excision was explained in measured language by the editor, Phillip Hamilton, who doubles as a Baptist preacher:


“It is my religious conviction that a male cannot have a husband. It is also my belief that to publish anything contrary to God’s Word on this issue would be to publish something in the newspaper that is not true.
“The newspaper respects the first amendment rights of those who express such opinions. The newspaper’s decision to edit the obituary is both ethical and lawful. It would be unethical to publish a news item that is known by the editor to be false. Based on the truth found in the Word of God, I could not in good conscience identify Mr Gambill as the husband of Mr Giles.”

Tampering with someone else's life choices may be understandable in one sense, but in a framework that touts itself as loving (Christianity), it is simply narrow and gross and hypocritical. The indecency that one person sees in another person's choices is exceeded only by the indecency of not allowing -- even in death -- the choices that were made.

So much sadness. Relying on the beliefs of others (small town newspaper) as a means of shoring up your own beliefs is, besides being vulgar, apostate from where I sit. Godless.
Posted by genkaku at 10:43 AM