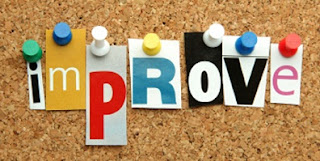 Posted elsewhere, but thought I'd tack it on here:

In one sense, the practice of Buddhism invites improvements into this life. An inventory of current situations and events reveals a number of ways in which anyone might iron out the wrinkles of greed, anger and folly. In one sense, Buddhism's practices amount to taking a chill pill. An easier life can result from Buddhism's various practices and so, in one sense, things may be improved through meditation, chanting, bowing and other suggested expenditures of energy. It may not be for everyone, but for my money, Buddhism is pretty good: Things do improve even if it's not always possible to adequately define those improvements.

That's one approach to Buddhism: Improvement.

But today I wonder if it's not seriously worth considering that Buddhism is actually a means of getting over "improvements." Sure, there are monasteries and robed figures defending and advancing "the Dharma." There are plain and mystical transports. There is wisdom and ignorance aplenty. But what if the entire point was to get over the notion that there was something to improve? What if everything were simply OK -- not in any wowsers, mystical and transporting sense, but simply in the sense that a daisy is OK?

What if blue sky were simply blue and had no need of any help or any improvement? Put another way, what's the matter with the way things are? Sure, there's knicker-twisting and enough woe to go around ... but what if improvement was something that seemed to happen rather than being applied by devoted acolytes? What if addressing difficulties as they arose was enough and you were simply daisy-OK?

Maybe another approach to Buddhism is to get over any notion that something might be improved, most specifically, you. What happens when you "improve" something? What happens when you don't? Yes, I can hear the activists grinding their 'improvement' blades ... telling me that if everything is OK, that just leads to uncaring lethargy. But there's nothing saying anyone has to refrain from action. Not improving anything doesn't mean doing nothing, right?

Maybe taking a moment in which not to improve anything is a good idea from time to time... more like Buddhism and less like the Boy/Girl Scouts.