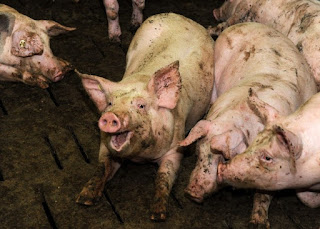 A year into the U.S. presidency of Donald Trump, it is so clear that bias and corruption are on the political front burner that voters may perhaps be forgiven for yawning as the latest revelations are served up as if they constituted a main course. For the merchants and the ascendant bourgeoisie, this is now mere snack food. It is almost impossible to remember when words like "democracy" and "ethics" had even a twisted meaning.


WASHINGTON (AP) — President Donald Trump and his appointees have stocked federal agencies with ex-lobbyists and corporate lawyers who now help regulate the very industries from which they previously collected paychecks, despite promising as a candidate to drain the swamp in Washington.
A week after his January 2017 inauguration, Trump signed an executive order that bars former lobbyists, lawyers and others from participating in any matter they lobbied or otherwise worked on for private clients within two years before going to work for the government.
But records reviewed by The Associated Press show Trump’s top lawyer, White House counsel Don McGahn, has issued at least 24 ethics waivers to key administration officials at the White House and executive branch agencies.

And adding to the general diminution of elements that might conceivably "make America great again" is the fact that Trump and his allies have only one "W" in their legislative pocket -- a bill that transmits billions of tax dollars to the wealthy at the expense of the so-called middle class and below. Healthcare has not been repealed and rewritten, as promised; infrastructure spending is left gasping for unfunded breath; and jobs promised to struggling Trump voters are no where in sight. Oh yes, and America's longest war -- the one in Afghanistan -- shows every sign of continuing into the unseeable future instead of ending ... well, never mind, Boeing has gotten some good contracts out of it while schools and hospitals and nation-building are playing the tits-on-a-bull role. If Benjamin Netanyahu approves of the U.S., we must be doing something right ... right?

The new normal: The longer it persists, the more distant the "old normal" appears. Money is morality and morality is money: If the wig fits, wear it.