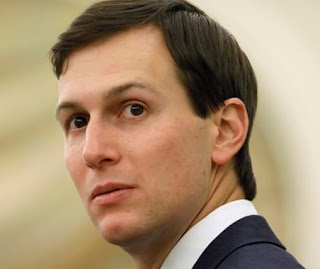 Maybe if I just say it out loud, I will be able to escape the drum-beat thought every time I see a clip or photo of Jared Kushner, U.S. President Donald Trump's son-in-law and a 37-year-old inextricably woven into to Trump's nepotism-laced White House leadership tableau. It's an utterly frivolous thought, but somehow I can't escape it every time I see Kushner's Texas-Hold-'Em, affectless face.

The thought is this: Jared Kushner is secretly the model on which Artificial Intelligence mavens are placing their bets. The robots of the future -- the ones who will be 'indistinguishable' from actual human beings -- will look like Jared Kushner. Kushner is the template for a better and brighter tomorrow.

In my frivolous little mind, Kushner is not yet the best model Artificial Intelligence can come up with, but he is the best model to date. In the back room behind the back rooms of AI enthusiasts, the Kushner doll needs and is probably getting some tweaking, but the current model is pretty damned good: No one has called out the Kushner robot. The doll still needs an infusion of 'emotion' and 'humanity,' but this product is good enough to fool the merchants' world that Washington has become.

With the serious subjects hanging over the world, this scenario is ludicrous. It's just that I can't seem to shake it off. It's "fake news," but if fake news is the news anyone might rely on these days, perhaps it's worth mentioning and being ashamed of.

Oh well. Jared Kushner is probably just another sociopathic moral coward like his father-in-law, but in the meantime I just can't escape this AI 'fairy tale.'