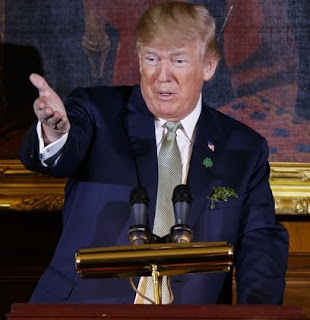 WASHINGTON (AP) — President Donald Trump has owned up to making things up.
For a meeting with Canadian Prime Minister Justin Trudeau, Trump was by his own admission unprepared — deficient in the fundamentals of the Canada-U.S. trade relationship that he’d been railing about since the campaign.
He insisted to Trudeau that the U.S. was running a trade deficit with Canada, a statement contradicted by U.S. government statistics. He was winging it, he confided to donors at a private Missouri political fundraiser Wednesday night.
“I didn’t even know,” he said. “I had no idea.”
Others might be mortified at being caught short. Not this president.
For Trump the showman, the episode illustrated his skill at improvisation. Still, it was a rare admission that he will say things without knowing if they are true.
Trump’s impulse to replace fact with fiction has defined him as a politician and as a businessman before that.

That's our current president. He seems to think he really is "as cute as a button."