bend in the tracks 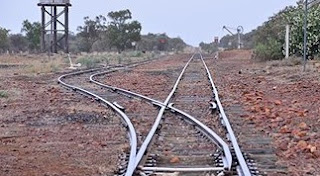 At just about the time I was 'supposed' to be in the throes of empty-nester-dom and a sense that at least 50 percent of my lifestyle 'should' be consumed by medical cares, I find the dusts of the past circling my ankles like some willy-willy micro-tornado in outback Australia.

The straight tracks veer this way and that.

My older son reports from Georgia that he has at last plugged himself into a school job helping "challenged" (Down Syndrome among others) kids. It is a job he has done before and he likes and, if it becomes more consistent, could help him steady his financial boat. That boat is a bit tippy given that his track-coaching doesn't pay quite enough and the gym-fill-in gig he has is helpful but not that helpful. It is good news.

My younger son, meanwhile, is down in Connecticut tonight, gearing up for a police exam in Groton tomorrow. He wants to be a cop at the moment. He's a bit edgy, since he's not quite sure what to expect from the exam or the future, but he has his girlfriend with him in Groton ... which girlfriend, it turns out, has had a run-in with her roommate and my younger son wondered today if she could come and live with us (and him) for a while. Both my wife and I said yes and both of us were a bit iffy. There's disruption in having others in the house at this point. Glad to help, on the one hand, and not-so-glad on the other. A wee voice inside would prefer to be taken care of rather than taking-care-of, no matter how mild the demand is.

The length of stay rests in part on how well my son does on the exam. If he passes, he thinks he and his girlfriend can move in together, which they had been planning anyway. But if not ... well, qui sait?

It's all mild stuff, I suppose, but little things are larger at my age and my wife's too.

Ah well, karma will out ... I suppose I can say that and some nitwit will swallow it.
Posted by genkaku at 9:32 PM