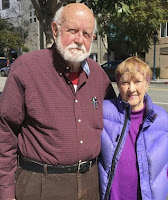 Veterans, like anyone else, get old. Fragilities mount with age. Pain mounts with age. Capacities dwindle with age. The idea that a veteran in a veterans home would be denied the right to die and the assistance to do so is just plain bullshit. Bullshit and unkind into the bargain.


SAN DIEGO (AP) — Suffering from heart problems, Bob Sloan told his children he wants to use California’s new law allowing life-ending drugs for the terminally ill when his disease becomes too advanced to bear.
But then the 73-year-old former U.S. Army sergeant learned that because he lives at the Veterans Home of California at Yountville — the nation’s largest retirement home for veterans — he must first move out.
Veterans in government-run homes in many parts of the country that have legalized physician-assisted death, including Colorado, Vermont and Washington, D.C., are finding similar restrictions because assisted suicide goes against the policy of the U.S. Department of Veterans Affairs.

If life, as alleged between the regulatory lines, were actually "sacred," there would be no wars and hence no veterans in the first place. It is infuriating that the 30- and 40- and 50-something writers of regulations and morality templates should be allowed to take away from those in their waning energies the one remaining sense of control and self-sufficiency -- the right to die on their own terms.

There is already enough mediocrity available in group-think goodie-two-shoes universe. Let's get it straight: Death is an option that can neither be outflanked nor avoided. Anyone making a "mistake" by committing suicide is making his or her own mistake, not the mistake someone else has made up. Does suicide discommode those left to clean up the mess? Sure -- just as any other death might.

But veterans -- who may well have put their lives and almost assuredly their souls on the line in combat -- are wholly dishonored in this mediocre, bureaucratic clusterfuck. They signed over their lives once to the power of those who write regulations and promote wars. And now, when they are older and considerably weaker (but wiser), they are expected to toe some governmental mark AGAIN?

Your grandmother's observation comes to mind: "Fool me once, shame on you. Fool me twice, shame on me."
Posted by genkaku at 10:47 AM