my childishness and Donald Trump 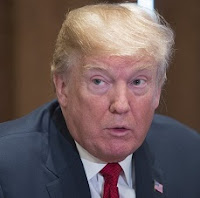 Like some childish teenager looking to reshape the world in his or her own image, I woke up this morning imagining that Donald Trump was the commander in chief of the United States. Which he is. And realizing, teen-fashion, that were he to issue an order, I seriously doubt (but don't know) I could follow it. Why? Because viscerally I sense that the man is a coward.

Everyone is a coward about something, but Trump's cowardice is a step too far. What is a coward but a man or woman who is willing to shed without compunction other people's blood? Morally and physically, Trump has "coward" written all over him and cowards are frightening because they seek to excuse themselves rather than at least trying to face their fears. Trump, as a humorous email I recently received said, "is the first person to don a dress on the Titanic."

Waking early, playing the teenager, I think the commander in chief is not a man who deserves to be followed. It's visceral. It is frightening. And angry-making.

Led by a coward.

During the Vietnam police action, there was the possibility of "fragging" an officer who was too free and easy with the lives of his men ... tossing a grenade into his tent, shredding the poseurs. We are all cowards about something, but enough is enough. Everything on the cheap. Everything a "deal." Everyone else's ox is worth goring.

OK, I've had some coffee now and the fires are banked a bit. We have received what we asked for. No doubt we will outlive this mistake as the mistakes before it were outlived. But it is still hard not to wish that someone would water-board this guy.

PS. What an era, when the former director of the CIA, John Brennan, would address the president of the United States in a Twitter message made public: "When the full extent of your venality, moral turpitude, and political corruption becomes known, you will take your rightful place as a disgraced demagogue in the dustbin of history. You may scapegoat Andy McCabe, but you will not destroy America...America will triumph over you.”