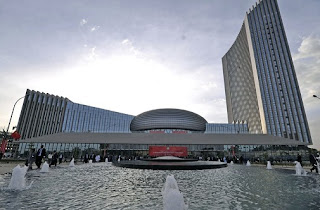 A number of years ago, when the Vatican's penchant for pedophilia was in vogue, I remember vaguely reading a story that said the world's largest corporation had seen its U.S. donations dwindle and had decided to put its money/efforts on a less criticism-laced source of income: Africa.

Now the U.S. seems to realize it has been left in China's economic dust on the largely-impoverished and vastly-corrupt continent: China brought its checkbook to the fray and invested. The U.S. brought its moral posturing and has been left sucking hind tit.


ADDIS ABABA, Ethiopia (AP) — The sleek, green-and-white trains glide past the congested, ragged streets of Addis Ababa along the city’s new light rail — built and financed by China. The towering silver African Union headquarters here was built by China, too. So was the new ring road system around the city. And the new railway connecting landlocked Ethiopia to Djibouti.
Across the Atlantic Ocean, America has noticed.
From Ethiopia to Djibouti, Kenya to Egypt, the United States is sounding the alarm that the Chinese money flooding Africa comes with significant strings attached. The warnings carry distinct neocolonial undertones: With Beijing’s astonishing investments in ports, roads and railways, the U.S. says, come dependency, exploitation and intrusion on nations’ basic sovereignty.

The Chinese footprint has been established over a number of years. Somebody somewhere has been doing some thinking. The United States has meanwhile been sharpening its capacity to whine. The implicit suggestion that American aid would come without strings attached ... oh, c'mon guys!