"nobody wants to get their hands dirty" 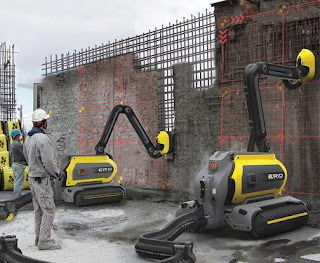 My father once wrote in a letter from Perros-Guirec, where he had retired after decades of teaching Shakespeare at Smith College, that there was some wonderful satisfaction in rehabbing the space above a garage where he intended to rest his retired head. There was nothing subtle or conniving or implausible about sheet rock. The end of a work day was, well, the end of the work day: He could see his progress, nurse banged fingers, wash plaster dust from beneath his nose, sip a little wine. Getting dirty was honest stuff and he liked it -- a sentiment I agree with. Getting dirty has some kind of clarified blessing in it, however much those willing or forced to do it may wish they could stay clean.


SAN FRANCISCO (AP) — As a teenager working for his dad’s construction business, Noah Ready-Campbell dreamed that robots could take over the dirty, tedious parts of his job, such as digging and leveling soil for building projects.
Now the former Google engineer is turning that dream into a reality with Built Robotics, a startup that’s developing technology to allow bulldozers, excavators and other construction vehicles to operate themselves....
The rise of construction robots comes as the building industry faces a severe labor shortage.
A recent survey by the Associated General Contractors of America found that 70 percent of construction firms are having trouble finding skilled workers.
“To get qualified people to handle a loader or a haul truck or even run a plant, they’re hard to find right now,” said Mike Moy, a mining plant manager at Lehigh Hanson. “Nobody wants to get their hands dirty anymore. They want a nice, clean job in an office.”

Dirt and sweat and muscle have their drawbacks. First there are the clean folks in clean cubicles who almost uniformly seem to know what perfume will humble the stink of sweat but talk more than they walk. Second, muscle doesn't last forever and some security in life is desirable. And there are others.

But still, my father's satisfaction and my concurrence linger on the air. Dirty work is clean work where clean work is too often dirty, fret-filled and galling. I say this as someone who has lived on both sides of the fence. Painting apartments was one of the cleanest jobs I ever had. Book publishing was, by comparison, one well-dressed, gigantic pit problem.

I'm not trying to play the noble-savage card. I'm talking about actual-factual smiles. How or why it works, I haven't got a clue ... just like smiling.
Posted by genkaku at 9:52 AM