rocks to fend off armed intruders 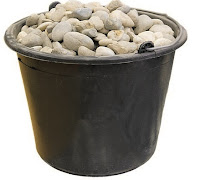 With a massive anti-gun march on Washington planned for tomorrow (3/24/18) as a result of the Feb. 14 attack on a Florida school that left 17 dead, one Pennsylvania school district has planted buckets of rocks in classrooms.


A rural school district in Pennsylvania is arming teachers and students with buckets of rocks as a last resort should an armed intruder burst in, the superintendent said Friday.
Every classroom in the district about 90 miles (145 kilometers) northwest of Philadelphia has a 5-gallon bucket of river stones, said Blue Mountain School District Superintendent David Helsel.

The technique and perhaps desperation is tinged with the scents of the Palestinians when they take on Israelis with uniformly dubious results: Knife-wielding Palestinians are routinely shot dead in confrontations that are then announced in the media by righteous and indignant Israelis... as if Palestinians had never heard of more lethal weapons and Israeli security forces lacked training in safely disarming a knife-wielding foe.

Never bring a knife to a gunfight, right? Or a rock to yet another American school shooting???

Dumber than a box of rocks ... or perhaps I should say "bucket?"

The National Rifle Association can be proud of itself and what it contributes to te United States.