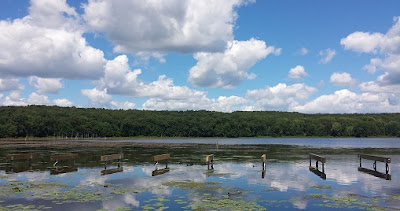 And it is with that in mind that I acknowledge my birthday that passed by yesterday. It was attended by several cards from friends who are more attentive than I (that's the sheepish part ... I seldom send cards though I am willing to acknowledge ... assuming I remember) and seem willing to remember. What is it about me that is worth remembering? Sometimes I know, but more often, I don't. I do hope a few kindnesses can outshine the cruelties I fear predominate.

OK -- 78th birthday. Year 79 begins. Friends send cards. Children phone-wish me a happy-birthday-pop. No one asks me what I want for my birthday. At my age, the answer is presumed to be "nothing," but that's not quite true. Right, I don't want a tie or socks or other neutral gadgetry. But if anyone had asked, I would have said promptly: "A cook." I am sick of cooking dinners ... of thinking through the menu, of executing so much as a hamburger. I'd like someone else's imagination to forecast and produce. Late afternoons are a time when I segue into lassitude. I don't like cooking and I don't like interrupting a good bit of lassitude. Lolling is important, imagining takes energy ... yes, a cook with his or her own perspective (skip the fish, add some weird flavors) on something good. Oh well, another time, perhaps.

One of the cards I got came from someone who did not sign it. "Always an admirer" it said in a very precise, mildly-wobbly and minuscule script. And then the PS, "Mais où sont les neiges d'antan?" from François Villon. A mystery card whose mystery I cannot solve, however much I might want to ... which is not a lot. At my advanced age, mysteries strike me as important markers that deserve breathing room rather than solutions.

Thanks for what I know.

Thanks for what I don't.

And if I ever receive another cereal-box decoder ring, and if by chance it coughs up the meaning of all things, I'll let you know. The first decoder ring I got was lost in the shuffle of becoming 78.
Posted by genkaku at 11:27 AM