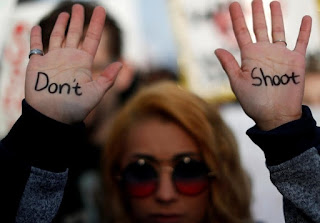 To my delight and his despair, he had not been stationed in a hot zone -- a place where bullets proved whatever today's muscular point of view asserted. Largely, he was bored stupid and despaired of it. How could his idealistic view of "service" be met without the threat of tragedy, of wounding, of death? What a bummer. Interesting how much of tragedy and idealism are cocooned in lethargy and boredom.

Yesterday (3/24/18), thousands of young people, attended by their sympathetic adults, rallied and wept across the world. Guns were not an acceptable means of addressing dangers supported by those who claimed to find guns unacceptable. It was too horrific -- shooting kids in schools and elsewhere. It had to stop. Massive rallies ... many tears ... heart-felt emotion ... and yet lethargy and boredom lingered serene and assured along the edges of an eruption of something-must-be-done.


WASHINGTON (Reuters) - Chanting “never again,” hundreds of thousands of young Americans and their supporters answered a call to action from survivors of last month’s Florida high school massacre and rallied across the United States on Saturday to demand tighter gun laws.

In some of the biggest U.S. youth demonstrations for decades, protesters called on lawmakers and President Donald Trump to confront the issue. Voter registration activists fanned out in the crowds, signing up thousands of the nation’s newest voters.
At the largest March For Our Lives protest, demonstrators jammed Washington’s Pennsylvania Avenue where they listened to speeches from survivors of the Feb. 14 mass shooting at Marjory Stoneman Douglas High School in Parkland, Florida.

While my son had been away, the U.S. had passed a tax bill that improved the lot of the obscenely wealthy. Arms manufacturers -- Boeing, General Dynamics, drone makers, and other coupon clippers -- got a big boost. Killing brown people abroad was acceptable and even enjoyed a certain cachet in American ghettos. Make America great again ... but shooting kids in schools meant your kids and mine were at risk.

Enough! Sort of. The government could not find a way to advance the cause of peace -- health care, infrastructure, climate, student debt et al. -- so it fell back on the old faithful -- the threats of "terrorism" and war and scaring those who, a moment ago, had been horrified.

How I wish I had a solution. How I wish I could stand above it all and declare some sort of victory over violence as a response to life's hardships. How I wish I could exempt myself from complicity. But I cannot. I am glad my younger son has taken the trouble to get a gun license and, more, a permit to carry a concealed weapon. Why? Because it is my strong feeling that at some point there will be a stand-off between those who have and those who have not. A literal stand-off in which the 'haves' will deploy the police who will (again) act as their proxies. It'll all be legal, but that doesn't mean it will be just or digestible and going unarmed ...

Congress is conveniently out of town as yesterday's rallies disperse. Will these 'representatives' return and respond to thousands of marchers? If they do, what is the payoff? If they don't, what is the payoff? Perhaps the unbridled venality of our representatives is an exact representation of the electorate it represents ... even the most delighted of liberals.  Mona-Lisa fashion, lethargy and boredom offer a small and meaningful smile. The politician-purchasing National Rifle Association and an everything-has-a-price-tag president like Donald Trump suggest that the odds favor a refocusing of objectives and a forgetfulness among even the bereaved.

I wish they wouldn't insist on killing my kids, but, as the old reminder used to go, "If wishes were horses, beggars would ride."

I am too weak to parse and think this issue out with clarity. It is no consolation that I am not alone.
Posted by genkaku at 10:06 AM