Elon Musk: Is it the punch bowl? 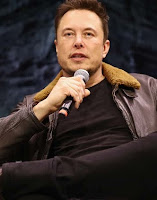 For some reason, I keep wondering if Elon Musk, founder of SpaceX and Tesla, is somehow spiking the punch as he pontificates on a future he seems to have difficulty in proving. How did he ascend to the level of someone-worth-listening to? It's not that I want to gainsay his future-vision, I just wonder. Is it the money he seems to command? Is it the dreams and/or nightmares he coaxes?

Every story I read about his electric car seems to be yet another extension of the deadline on which the Tesla will start rolling reliably and affordably off the production line. Like the Roman Catholic Church, Musk always seems to need more money and more time. And he gets it. Somehow, he gets it. OK.

Now he has proposed a 100-meter rocket to get out there and colonize Mars as a counterpoint to the potential for a world war. Colonize with the BFR (Big Fucking Rocket). Colonization would be a good idea in order to preserve the human race -- seeding the future-clouds, as I get it.

Personally, I agree with him that an unregulated artificial-intelligence world is more dangerous than nukes, but you and I both know that artificial intelligence is irresistible ... though I gather it hasn't yet figured out how to stave off the potential for a nuclear conflagration, assuming anyone wants to buy into that paranoia.

Warren Buffett, founder of Berkshire Hathaway, has accumulated untold wealth with his savvy business mind. He has won the right to be consulted/credited in business matters. But how did Elon Musk get to be a prognosticator? Is it the punch bowl or am I just another doddering mind unable to keep up with the times?

I'm not trying to diss this guy, just trying to understand. On the one hand, perhaps he is a good enunciator of our dreams. On the other hand, Ponzi schemes abound.
Posted by genkaku at 10:29 AM