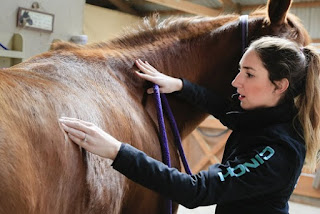 If you're having a hard time finding a qualified masseuse for your horse, Nebraska's plight may help to elucidate and ease your quandary.


Nebraska doesn’t have a single licensed equine massage therapist, and lawmakers who recently chipped away at regulations governing various other professions blame an expensive and rigorous process that even includes the prospect of jail time for violators....
While horse massage is the current focus in Nebraska, it’s part of a larger national trend — particularly in Republican-controlled states — to reduce barriers to licensing, said Suzanne Hultin from the National Council of State Legislatures. In the 1950s, about one job out of 20 in the U.S. required a license. Today, around one out of every four professions is licensed, she said. Five states now don’t even require licenses to massage humans....
In 2012, the Department of Health and Human Services issued Hough a cease-and-desist notice after she called the agency to learn about becoming licensed. She was told she would have to stop massaging horses or face up to 20 years in prison and a $25,000 fine. She stopped doing the work and set out on what has become a seven-year quest to create new regulations.

My risqué little mind wonders vaguely if there had been any raids on stables where ... uh ... you know ... massage was suspected of segueing into hanky-panky.
Posted by genkaku at 5:50 PM