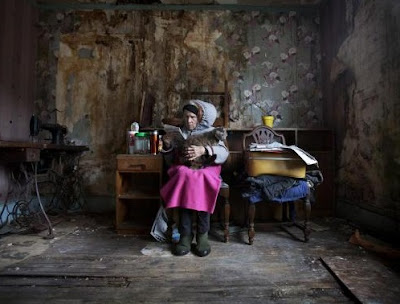 I can't help but wonder if the alleged ascendancy of the documentary isn't partly due to the proliferation of "fake news," the agitation-propaganda nature of what used to pass for sober and supported reporting and assessment.


“It feels like the golden age of documentary right now,” says Josh Koury, a professor at Pratt Institute and a documentary filmmaker. “It’s an amazing time to be making documentary stories”...
“We’re having a kind of crisis of logic and a crisis of language where it feels like words don’t mean things anymore and nothing has to make sense,”[filmmaker Sabaah Folayan] said. “People are more thirsty for this content. People are recognizing that they need to know about others and this is the way to do it.”

The commonality of culture ("I don't want to die," for example) has somehow been shredded by individuals and groups with loud voices and little care. There's too much information that ends up transmitting too little information. Those who lean on "Jesus Christ," for example, ignore the great likelihood that he was a brown man, middle-sized in stature, who came from a middle-class environment (spoke three languages) and the unlikelihood that he was some shuffling, head-bowed, humble-pie guy (see Hallmark calendars) without any but a loving agenda. Donald Trump's constituency, the ones who felt left out and left behind, are more numerous than anyone thought. Upscale exceptionalists and TED talkers are more confusing than they are healing. It's time to check in with people who are as confused as I am, as lonelified and insignificant as I. Documentaries give me company where the it-is-what-it-is crowd skirt the issue and dissemble, whatever their intentions.

Lately, I have been party to the thesis of the article linked above -- pausing to watch documentaries about all sorts of topics ... just people. I like feeling a part of something less grand than god or serenity. I don't mind if someone is making a buck on it. I guess I'm a fuck-up but if I have company, being a fuck-up is not all that bad. I will try not to hurt others, it's true, but I've lived long enough to know that those efforts, whatever they may be, are likely to fall short.

Documentaries don't necessarily prove anything but they do seem to swing my vote.
Posted by genkaku at 10:56 AM