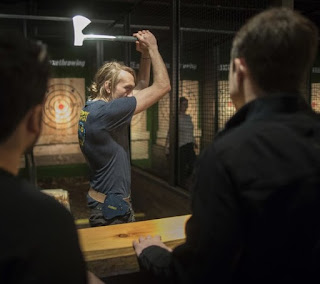 There were a number of rituals that came with the summer jobs I had as a teenager. One was seeing how much bullshit you could feed to this summer worker before s/he called you out. It was a rite of passage -- from wet-behind-the-ears newcomer to member-of-the-clan employee.

The one I remember most clearly was in a lumbering camp where one of the full-time workers turned to me idly during a smoke break and asked, "Did I ever tell you about the time I killed a cougar with an ax?" And I replied genially, "Go fuck yourself!" Everyone chuckled and I was in.

Now, somehow associatively, it seems that there is a movement afoot to shoehorn ax-throwing into the rainbow of Olympic sports. Ax-throwing. It seems to have gotten a start in, of all places, Brooklyn and it appeals to me: At least it gets people away from a screen on which the only effort is with the thumbs. Throwing an ax is no small feat. More important, it is an actual-factual feat ... teasing, testing, and utterly useless under ordinary circumstances. But strangely satisfying.


Kick Axe Throwing is the first bar in New York City to pick up on a nationwide trend of ax throwing, a growing sport that some enthusiasts hope will take off the way bowling did in the last century.
“People are like, ‘Sharp objects and beer? What a great idea that is.’ But truthfully, after you have a couple drinks you start to actually throw a little bit better,” said Alexander Stine, an “axepert” at Kick Axe. He honed his own skills growing up in Colorado throwing knives at carnivals and now trains newcomers on proper technique. “It’s about believing in your ability to do something you didn’t think you could do before.”

Aside from anything else, knowing how to throw and ax would allow people to put something interesting on their curricula vitae/resumes under "hobbies."