My son, Angus, who moved from a four-year college education in computers (and concomitant debt), to coaching track (which he really likes irrespective of low wages) in Georgia, has turned his entrepreneurial capacities to coming up with a T-shirt ad (from which he will get rich???): 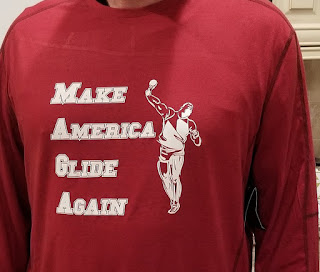 Angus came up with the inside-the-beltway saying that he and his mentor are hawking to those in the world of shot-putting who get the drift.

"Gliding" is one format in which shot-putting is performed.

I think it's kool. Whether it's a money-maker or not has yet to be determined.

With luck, Angus will be buying the pizza the next time we meet.
Posted by genkaku at 11:28 AM